Dalton Farm is a 560-acre, planned-unit development comprised of 468 single family homes, townhouses, and carriage houses. Dalton Farm is located in beautiful Dutchess County, NY on the historic grounds of an estate that once belonged to Franklin Roosevelt Jr. Dalton Farm features a swimming pool and tennis courts and includes the 200-year-old Roosevelt House which serves as the clubhouse. The Dalton Farm site also contains a working horse farm and equestrian center. Dalton Farm is a deed-restricted community governed by a Homeowners Association. 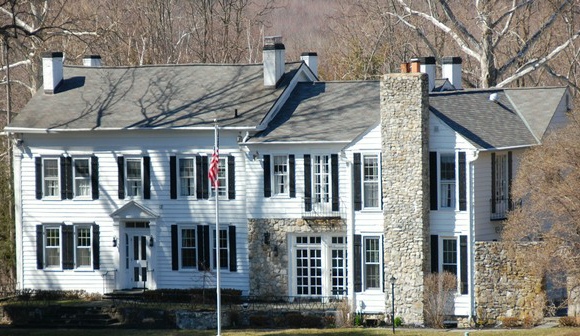 An important part of our American heritage lies just beyond the front door of the Dalton Farm Clubhouse. In Colonial times the Beekman / Poughquag Road was part of the “Colonial Highway” running from Connecticut to Fishkill Landing. During the American Revolution the Continental Army used this road to transport troops and supplies, passing right by what is now Dalton Farm. Just down from the clubhouse and across from the Mill House was an Inn commonly known at the time as the “Widow Dennis’ Tavern.”  Isaac Dennis and his wife often served free meals to the officers of the Continental Army and, on at least one occasion, to General George Washington himself.

Isaac died during the war and his wife carried on with the Inn but also managed the Grist Mill and the Saw Mill as well. Sadly, the Inn was demolished in the early 1990’s and an important part of American history and Beekman’s heritage with it. The Noxon family erected the original section of the clubhouse in 1811-1812, and, for almost two centuries, the property was used exclusively as a produce and cattle farm. In 1917, Henry Wilder Healy purchased Lime Ridge Farms, and in the 1930’s the farm was purchased by the Fortington family. The farm consisted of a stable for thoroughbred horses and kennels. Edna Fortington also bred prize bull terriers.  The family also owned an airport where Beekman Elementary school now stands. The property was later donated to the school district. In 1933, the Fortington family expanded the house. On a separate note, Gus Fortington invested in Paramount Studios and became its Executive Chairman.

The site has seen its share of national and local history. In 1949 Franklin Delano Roosevelt, Jr. purchased the nearly 750 acres of land and house from the Fortington family.  This youngest son of FDR, (arguably the most significant president of the 20th Century, and Eleanor, one of the most important women of her time) was himself an impressive person.  A lawyer of note, business person, manager of the estate, Under Secretary of Commerce, two-time U.S. Congressman, highly regarded equestrian, and noted breeder of cattle and horses, Mr. Roosevelt Jr. was well established as a man of importance. For over 35 years (1949-1985) of residency, the manor house played host to many world-renowned dignitaries, including three sitting Presidents: Kennedy, Johnson, and Nixon. Foreign leaders, including David Ben Gurion, ambassadors, senators, and congressional representatives were regular guests to the site.  Very often, national and international deals were brokered and policy established here.  During the early 1960’s, Jacquelyn Kennedy fox hunted with FDR Jr. who, at the time, was president of the Rombout Hunt Club.  In the 1970’s, Jacquelyn Onassis and her young teenage son John-John spent time horseback riding on the farm.  In addition, a frequent visitor was Eleanor Roosevelt, who would drive over from Hyde Park to spend time with her son and grandchildren. In 2011, in honor of the residents of this great house and in memory of all those who passed through its portals, we celebrated the 200th Anniversary of this impressive structure. As you wander through the house imagine the wonder of it all.  We are truly fortunate to be a part of something so special.

This website uses cookies so that we can provide you with the best user experience possible. Cookie information is stored in your browser and performs functions such as recognising you when you return to our website and helping our team to understand which sections of the website you find most interesting and useful.